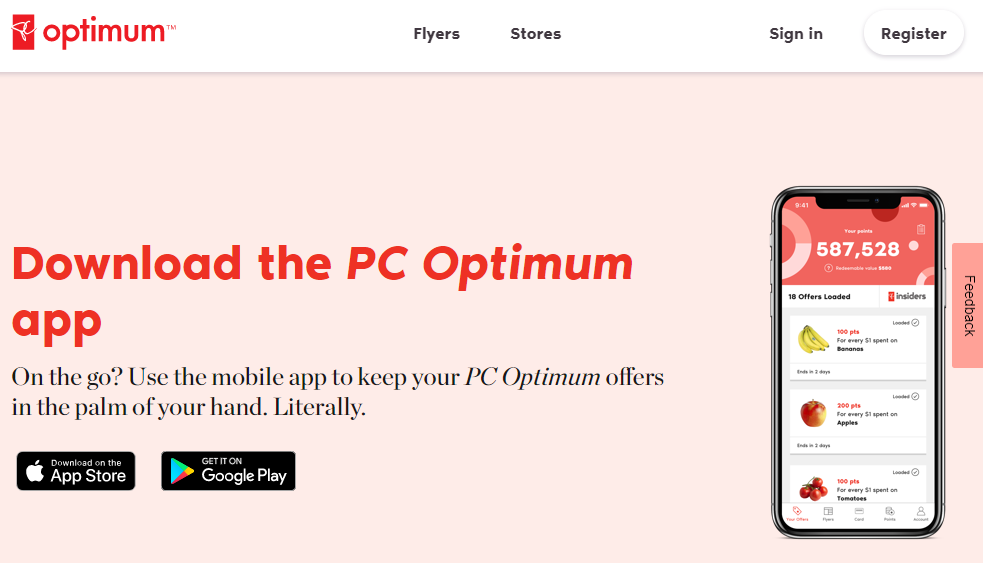 PC Optimum App is a single loyalty program that is run by the Canadian retail conglomerate called Loblaw Companies. It was launched on February 1, 2018 and the program is a result of a joint venture between Loblaws’ PC Plus and Shoppers Drug Mart’s Shoppers Optimum programs.

With the help of this program, shoppers can EARN points for making specific purchases at Loblaw grocery stores including in-store purchases and purchases made through the mobile app or the Optimum website. Shoppers can also earn rewards for shopping at specific store locations at Shoppers Drug Mart, Esso, and Mobil.

The App is 50 MB in size and works on Android version 5.0 and above. The app is frequently updated and the currently running version is 4.5.6.

Downloading the PC Optimum application is easy on both Android and iOS platforms. This is because the app is available on the Play Store as well as App Store.

How to USE PC Optimum app?

How does PC Optimum app work?

Users can earn Optimum points either through personalized offers or else for every dollar they spend. Offers change every week but some offers can be carried forward to subsequent weeks. Points can also be earned at stores apart from online shopping. Users can also utilize the latest feature to add up to nine PC Optimum members to pool the points together in order to avail more personalized offers.

Points can be redeemed in-store or through online shopping. 10,000 PC Optimum points are equivalent to $10 which is the minimum redeemable value and it can go upto a maximum value of 500,000 points which has a worth of $500.00.

Offers can be loaded either online or in the app. Upon viewing the offers in the app, they will be loaded to the account from where users can begin redeeming them.

Yes, the app is available free of cost.

PC Optimum app problems are sometimes common, so in case the app is not working, people can restart the app or update it from the Play Store or the App Store.